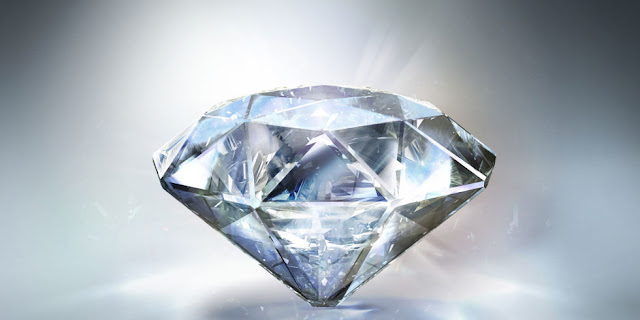 Physicists and chemists from the University of Bristol have found a way to convert thousands of tons of nuclear waste into apparently worthless battery synthetic diamonds that can generate a small electrical current for longer times even longer than the whole history of human civilization.
Disposal of nuclear waste is one of the major technical challenges of the 21st century. We are trying to finding positive ways of getting rid of it. An unexpected example of this is the work of the Bristol team on a major source of nuclear waste from earlier nuclear reactors in Britain, now decommissioned after more than half a century of service.
The first generation of these reactors used graphite blocks as moderators to slow neutrons to maintain the nuclear fission process running, but decades later now UK is left with 95,000 tons of graphite blocks that are now classified as nuclear waste, mostly containing radioactive carbon-14.
Carbon-14 is a beta emitter with low yields particles that cannot penetrate even a few centimeters in air, but it is too dangerous to leave it in the environment. Instead of burying this huge waste of nuclear reactors, the Bristol team’s solution is to remove most of the C-14 graphite blocks and turn them into diamonds generating electricity.
Nuclear Diamond battery is based on the principle that when an artificial diamond is exposed to radiation, it produces a small electrical current. According to researchers, this will make a battery that has no moving parts, no emissions, and remain maintenance free.
Bristol researchers found that carbon-14 was not uniformly distributed in the nuclear blocks, but is concentrated in the near side of the uranium fuel rods. To produce the batteries, the blocks were heated to expel the radioactive atoms, leaving the blocks much less radioactive than before. The c-gas 14 is collected and then using high temperatures and low pressures it is converted to synthetic diamonds.
Once formed, the beta particles emitted by the c-14 interact with the diamond lattice, discharging electrons and generating electricity. The diamonds themselves are radioactive, so they receive a second nonradioactive diamond coating to act as a shield against radiation. This means that a person sitting next to a diamond battery would receive about as much radiation as if he was sitting next to a banana.
“Carbon-14 was chosen as the base material because it emits short-range radiation, which is absorbed quickly by any solid material,” says Neil Fox, lead scientist of the research. “It would be dangerous to ingest or touch with bare hands, but kept safely in the diamond, no short-range radiation can escape. In fact, diamond is the hardest substance known to man, there is literally nothing else that we could use that would offer more protection’
The team has already built a diamond prototype battery which uses nickel-63 isotope such as radioactive fuel and now proceed to the use of carbon-14, which will be more effective.
“We believe that these batteries are to be used in situations where it is not possible to recharge or replace conventional batteries,” said Tom Scott, professor of materials. “The obvious applications are in electric low power devices where the life of the energy source is required, such as pacemakers, satellites, high-altitude drones, or even space ships. There are so many possible uses, we ask the public to come up with suggestions on how they would use this technology using #diamondbattery. “